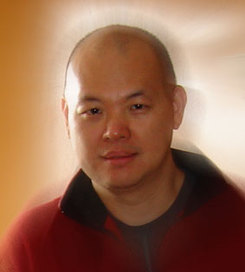 Wayne (Wia-Ling) Tan is a Spirit Healer, Psychic-Medium, Medical Intuitive, Channel, Spirit Releaser, Geomancer & Mystic. Originally hailing from Malaysia, he received his early education in Malaysia and Singapore before moving to Toronto, Canada at the age of 17.  His moniker ‘Mystic Traveller’ comes from his many years of travelling the world, offering healing and intuition to people, as well as visiting sacred sites to harmonise energy spots. This unique opportunity has afforded Wayne with the ability to connect with the cultures, the beliefs and the people he has encountered.

After leaving the corporate world in 2000, he set on resettling in Vancouver, BC in 2003, where he expanded his spiritual knowledge at the West Coast Institute of Mystic Arts under the guidance of founder Kelly Oswald, and was mentored by the likes of the late astrologer Charlotte Greenwood, channeler Susan Harris and author Malcolm K. Smith and within a year, he was asked to join the teaching faculty as a healing instructor.

Wayne has taken many courses at the prestigious Arthur Findlay College in Stansted, England since 2005.  He has been mentored many internationally world-renowned tutors like Ministers Simon James, Janet Parker, Simone Key, and internationally known mediums like Paul Jacobs, Mavis Patilla, Maureen Murnan, and the late Glyn Edwards. He has also undertaken courses in Spirit Release at the London School of Intuition and Healing with founder Sue Allen, author of the book, Spirit Release, as well as with David Furlough at the Spirit Release Foundation of Great Britain.

Wayne has travelled to Sydney, Australia, to study the Australian Bush Flower essences under the founder, Ian White.  He has been tutored by Marion Leigh, founder of the Findhorn Flower essences in Findhorn, Scotland and is currently in training to be a certified tutor for FFE.

In late 2005, Wayne developed the BLU-e™ system of biological and environmental harmonisation. BLU-e™ (an acronym for  Biofrequency Lightsource of Universal – Energetics) is a unique mix of understanding the teachings of the Oriental energy called Chi with the ancient knowledge of Egyptian theories. Coupled with modern techniques of electromagnetic and bioresonance sciences this new energy system has had amazing results in combining human (and animal) living spaces with their environment.

Keeping true to his moniker, Wayne travels frequently between North America, Asia, & Europe where his services are sought after by corporate and private clients. He has run workshops worldwide and has been featured recently on Hong Kong’s DBC Radio station where listeners called in to ask about their loved ones in Spirit. He is the first western-trained medium to do this in Hong Kong.

Wayne commutes regularly between Malaysia, Europe, HK and Canada. He spends most of his time in Penang, Malaysia and Vancouver, Canada.